Lodwar, 26th September 2022 (Governor’s Press Service)
A delegation from UNICEF led by Regional  Director for Eastern and Southern Africa Mohamed Fall today paid a visit and held talks with Governor Jeremiah Lomorukai.
In the meeting at the Governor’s Office, Lodwar, the team discussed areas of partnership with the County Government including in education, water, sanitation and hygiene (WASH), child protection,  health and nutrition.
Governor Lomorukai commended UNICEF for the continued support and stated his readiness to improve cooperation with partner organizations to address challenges faced by residents and contribute to development of the county. He said the organization was a longterm partner in the county and acknowledged their great input by the agency in Turkana.
He said Turkana was facing drought and called for support from UNICEF and other partner organizations, through provision of services such as  supply of water and cash transfer programme to communities affected.
“We need urgent and serious aid from development partners and UN agencies to support communities affected by drought who have lost livestock. In the South and East residents face danger of banditry and have to struggle against cattle rustling and the drought,” he said.
The Governor added that County Government emergency response had been affected by delays in disbursement of funds by the national government.
On his part Mr. Fall congratulated the Governor on his election as county boss and accepted that Turkana and regions in the rest of the horn of Africa were faced with a severe drought which was affecting over 10million children in the region.
He said that global attention was needed to respond to the effects of the severe drought in the continent, with vulnerable communities still recovering from effects of the Covid-19 pandemic.
The Regional Director acknowledged the high malnutrition rates, water scarcity caused by the drought, conditions that had contributed to high rate of school dropout and early marriages.
He said UNICEF will work to renew its commitment to help identify  needs of targeted community, to tailor programmes better to build their resilience to future shocks.
He promised that UNICEF will lead efforts to mobilize resource for resilience programmes and asked the county to strengthen coordination structures of development organizations to ensure better impact and avoid duplication of efforts.
In the meeting were County Executives Vincent Palor (Water Services) and George Emoru (Health and Sanitation); Chief Officer for Health Dr. Malcolm Lochodo, Directors Dr. Gilchrist Lokoel (Medical Services) and Dr. Joseph Epem (Lodwar County Referral Hospital). 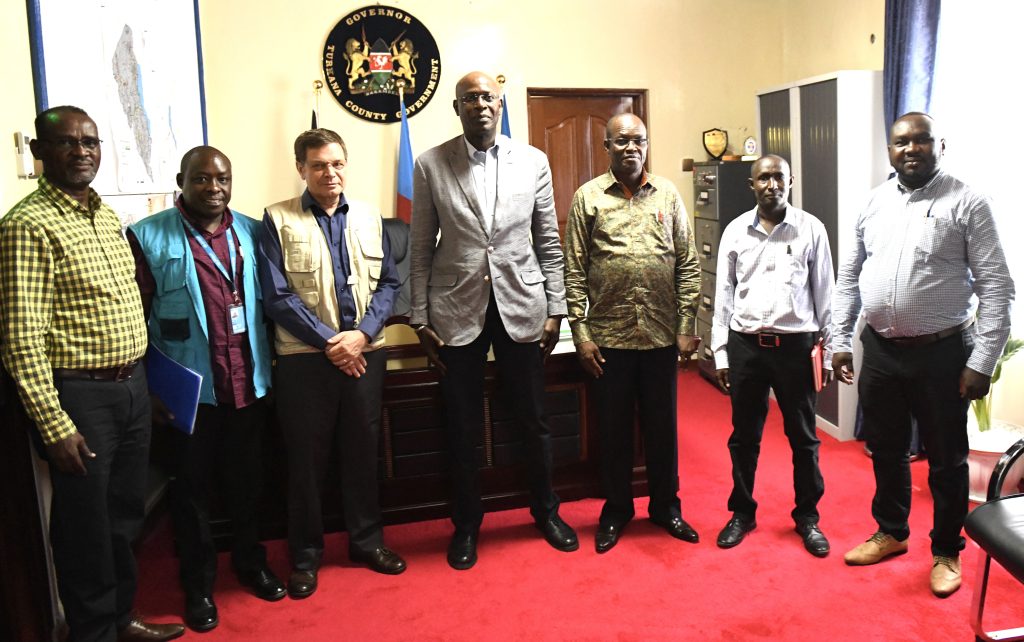