Senior Agri-Nutrition Officer in the County Department of Agriculture Aaron Ekipetot Nanok, 31, has been named the 2022 UN Person of the Year in Kenya.

Nanok, who heads the County Agri-Nutrition unit, was feted the prestigious award for successfully implementing a drylands agriculture project in Turkana, during a ceremony to mark UN Day at the Gigiri headquarters in Nairobi today.

World Food Programme Country Director Lauren Landis handed a plaque to Nanok on behalf of the UN, in the event also attended by Governor Jeremiah Lomorukai.

Nanok holds a Bachelor’s degree in Natural Resource Management from Egerton University, and a Masters Food Security and Community Nutrition from Gulu University in Uganda.

His efforts elevated more than 200 families to become food and nutrition-secure households thus contributing towards ending the perennial problem of hunger among the vulnerable women and children in Turkana.

Nanok joins the list of other remarkable Kenyans such as legendary broadcaster Martin Kingasia, former First Lady Margaret Kenyatta, and World Marathon record holder Eliud Kipchoge, whose works have significantly contributed to the sustainable realization of the sustainable development goals.

Ms. Landis said that Aaron was nominated for the award for work that reflected the aim of Sustainable Development Goals concerning ending hunger, proving nutrition, and promoting gender equality in ASAL regions through the practice of climate-smart agriculture using the readily available low-cost resources.

Governor Lomorukai described Aarons’ achievement as commendable and said that the County will upscale his model of operation to all parts of Turkana in a bid to transform the area to a more food secure county in the next few years.

He added that he was particularly pleased with Aarons’ use of Social and Behaviour Change Communication (SBCC) techniques in promoting the uptake of climate sensitive crop farming as opposed to unproductive pastoralists practices that has since been rendered less valuable by the changing climatic patterns.

The County boss pledged to further push for the revival of stalled irrigation projects in line with the Turkana’s agri-nutrition strategy and establish new schemes in high potential areas at the cost of Sh114.9 Million.

He also appreciated the UN agencies for working with the County towards enhancing water availability for domestic and agricultural use; promoting compliance to the locally led climate change action; supporting food production value chain and support towards the ECDE sector. The Governor called for further technical and financial support.

Governor Lomorukai said that Nanok was an accomplished human resource with remarkable set of skills and expertise to be tapped by the county. He holds post graduate diploma in Project Management, and professional diploma in Integrated Water Resource Management from Israel.

The National Environmental Management Authority (NEMA) and John Mugendi of KWS were this year’s runners up.

County Executive for Finance and Economic Planning Jennifer Nawoi, County Solicitor and acting Chief Officer for the Office of the Governor Ruth Emanikor as well as Chief of Staff Peter Yoromoe attended the event. 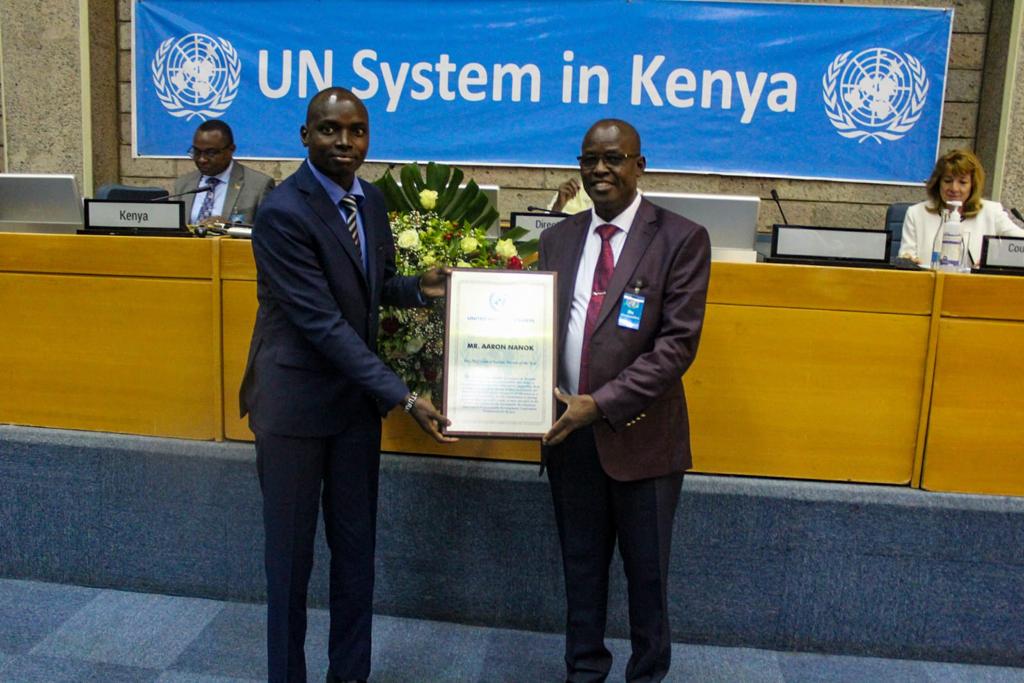